We started the morning a little later than usual to respect the community’s worship hours on Sunday. Aaron and Jon took the extra time to run through the misty Muhunga hills. After eating another Don Bosco breakfast, the team hit the road to the community and got to work.

The morning was filled by tedious tasks including wire extension, delicately pushing wire into protective conduit, and more water source recharge measurements. We were pleased to see that just overnight the pump we installed at chest height standing in the water was now fully submerged. Despite the day being the hottest yet, the team pushed through and made the most of the time. By mid-day, the wire was in place and the majority of conduit was installed. To help improve security, Sixpert and his team began adding concrete over every 10m of wired conduit and piping. 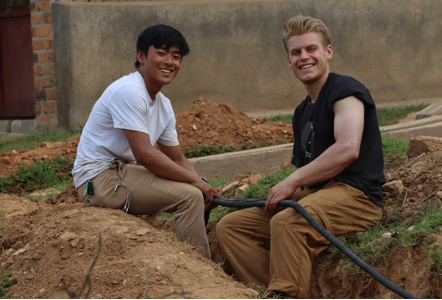 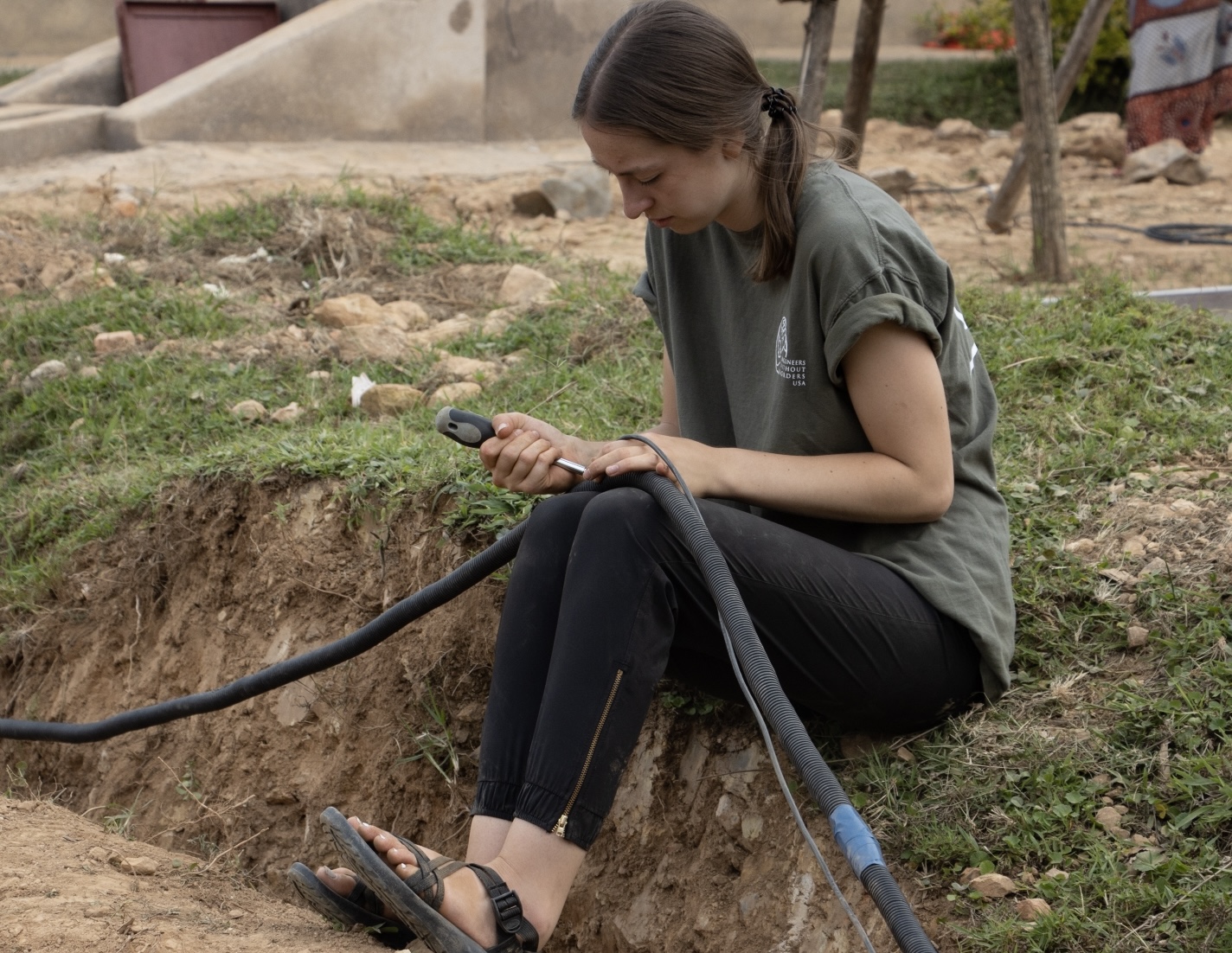 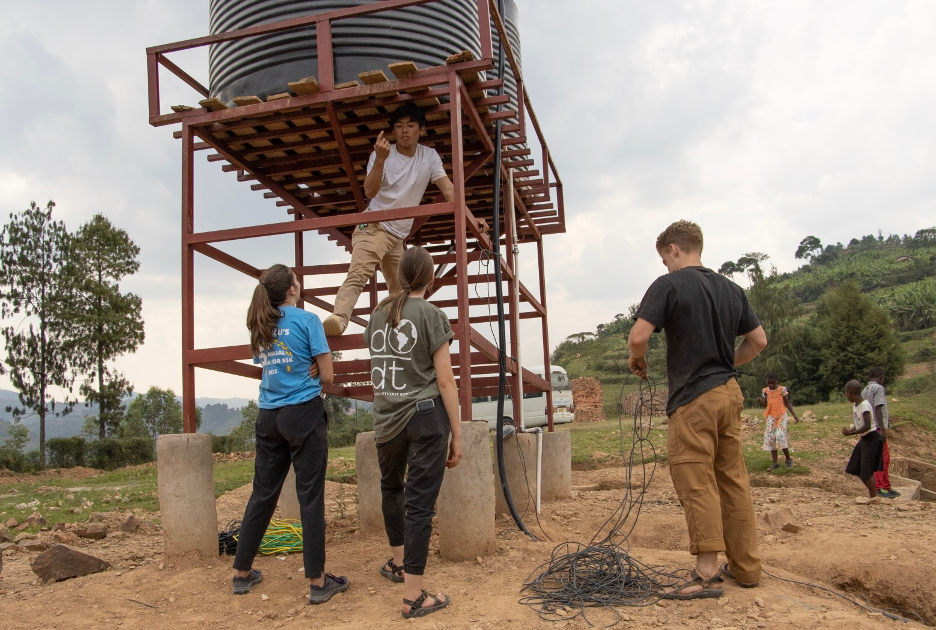 With the wiring completed and the sun beating down, the team laid out the solar panels and verified the voltage of each panel. They strategized how the panels would be connected using a combination of series and parallel connections. These panels were originally supposed to be installed on a water filtration structure. However, since the structure was not built by the time we arrived, the team is working on a short-term solution to mistake proof the wiring and allow the community to safely setup the panel system outside and return into their secure community building at night. 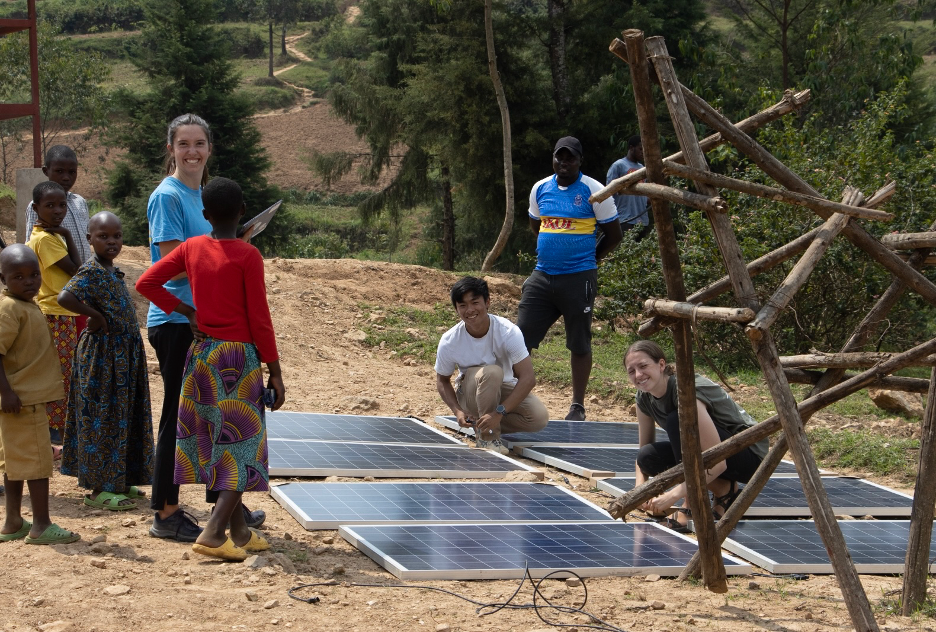 After setting up the panels and connecting the other wires to the control box, Aaron and Mia headed to the water source to verify turbidity was within specifications of the pump by using a turbidity tube. A turbidity tube has a black and white pattern (secchi disk) at the bottom of a transparent tube. The water level at which the secchi disk is visible from the top view determines the turbidity measurement. They were pleased to learn that the water was extremely clear with a reading of 55-50 cm. 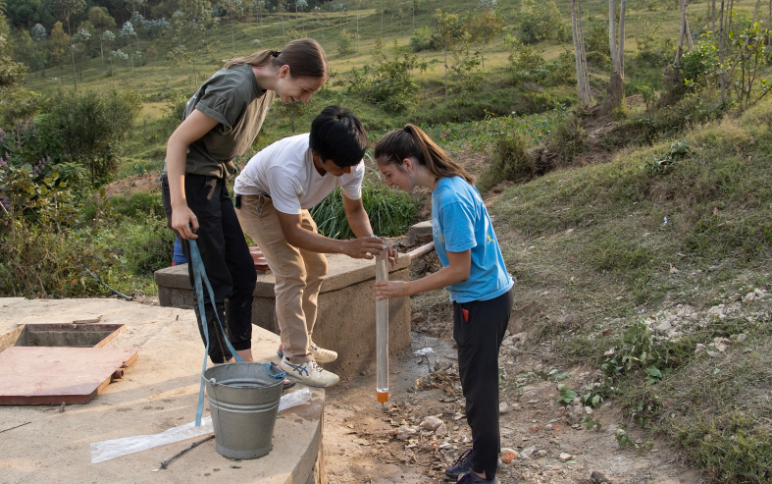 After confirming the turbidity measurement, Jon and Katie connected the solar panels and turned the pump on outside the community building. Meanwhile, Aaron and Mia verified the flow through the pressure valve before diverting the flow to the tanks. We were ecstatic to see water flowing through the first pressure relief valve before it was diverted to the tank. 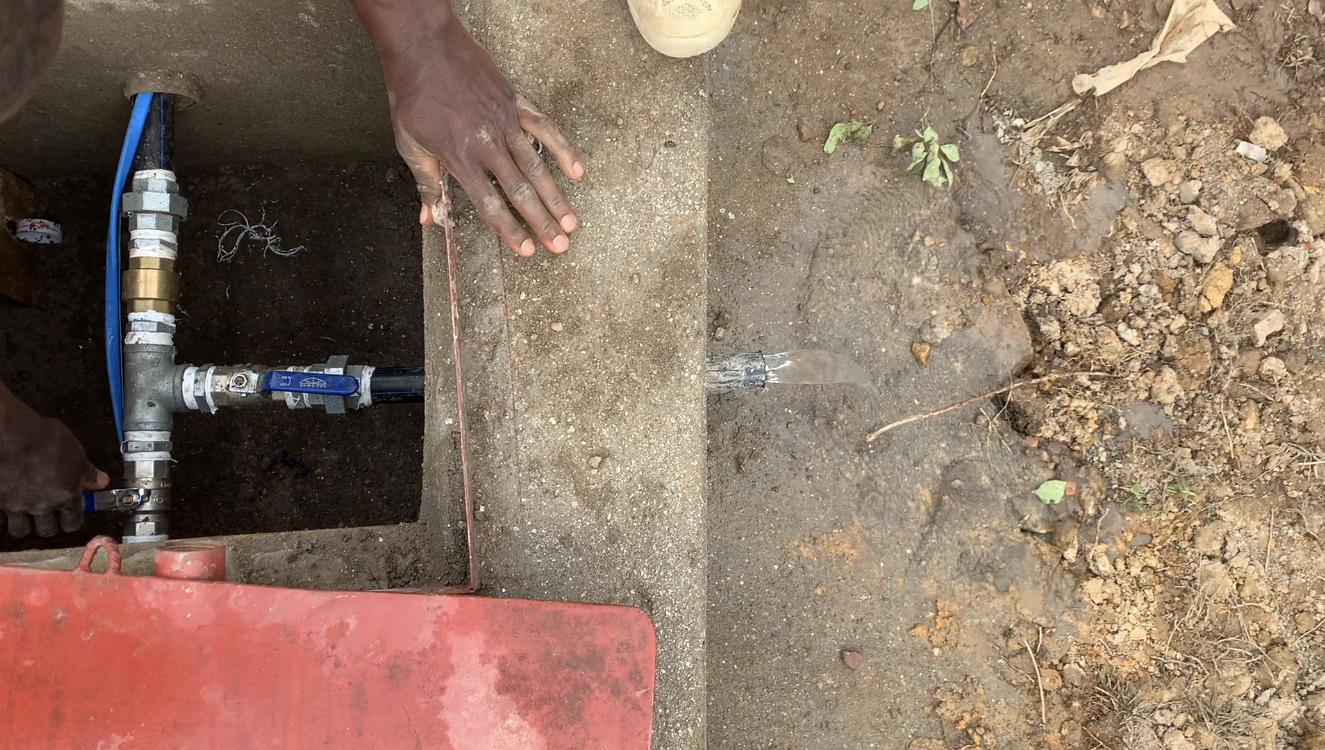 (Water flowing through pressure relief valve for the first time)

The team was devastated when a rainstorm rolled in minutes after turning on the pump. The rainstorm combined with the daylight burning meant that there was not enough power to overcome the head (vertical elevation and frictional losses). After measuring less than half the full voltage from the solar panels and hearing thunder in the distance, the team decided to pack it up and begin preparing for the last day in the community. 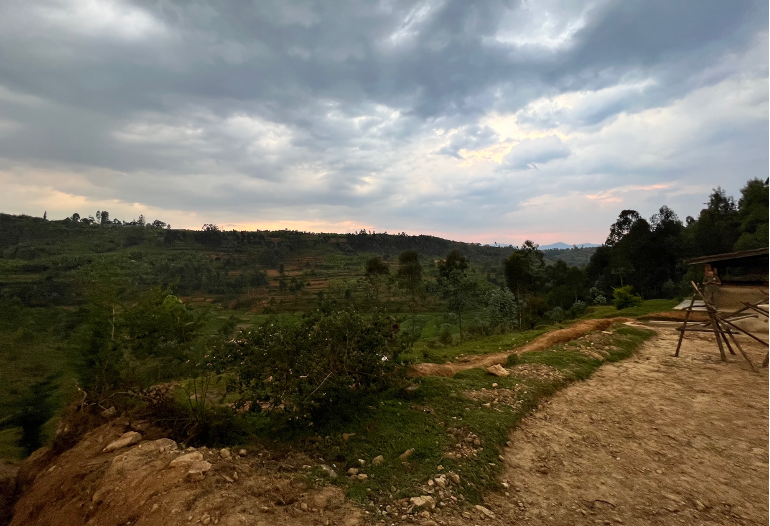 Late night calculations led the team to believe adding our spare wire could improve the performance of the system. When the team originally laid the wire they realized that they purchased far more than they needed. Since we were an hour out from the nearest market we didn’t want to be short on material. However, because we had extra wire we decided to splice in the extra wire in parallel so that we could minimize power loss between the pump and the control box.

Being our last day in the community, Jon and Mia got straight to work splicing and laying the wire while Katie and Aaron finished up interviews with Callixte and Adria. While previous interviews on the trip allowed us to update community stats and project logistics, todays interviews gave us the opportunity to have deeper insights into the personal lives of the community members. For example, Adria got married recently and Callixte has 5 children. 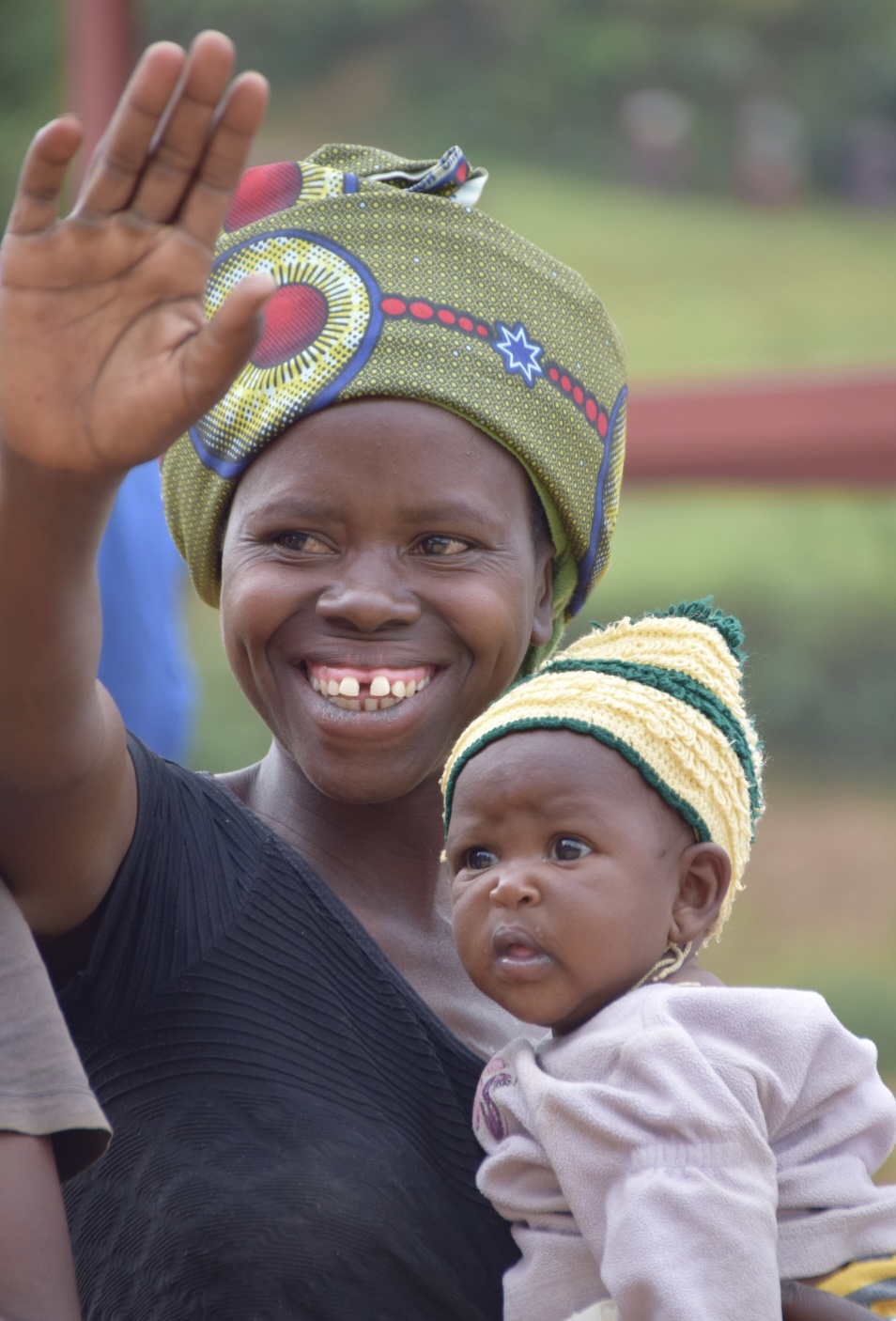 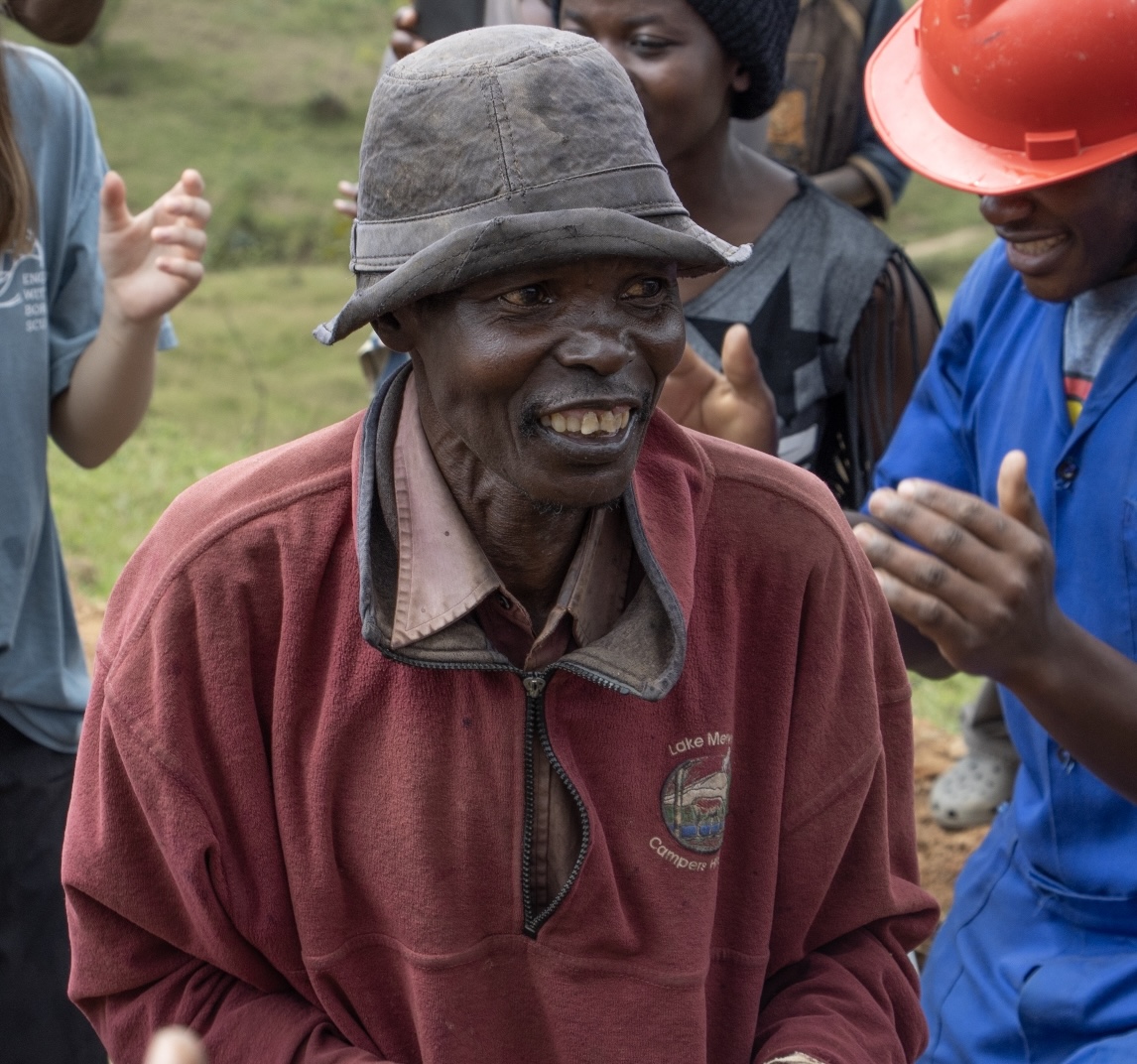 By noon, the team was ready to test the pump once again. Although it was a bit overcast, we were anxious to see the pump perform. Aaron and Mia headed down to the pressure relief valve and Katie and Jon stayed at the power control box. They flipped the on/off switch of the system and watched the power lights turn on indicating that the pump was renicing power. 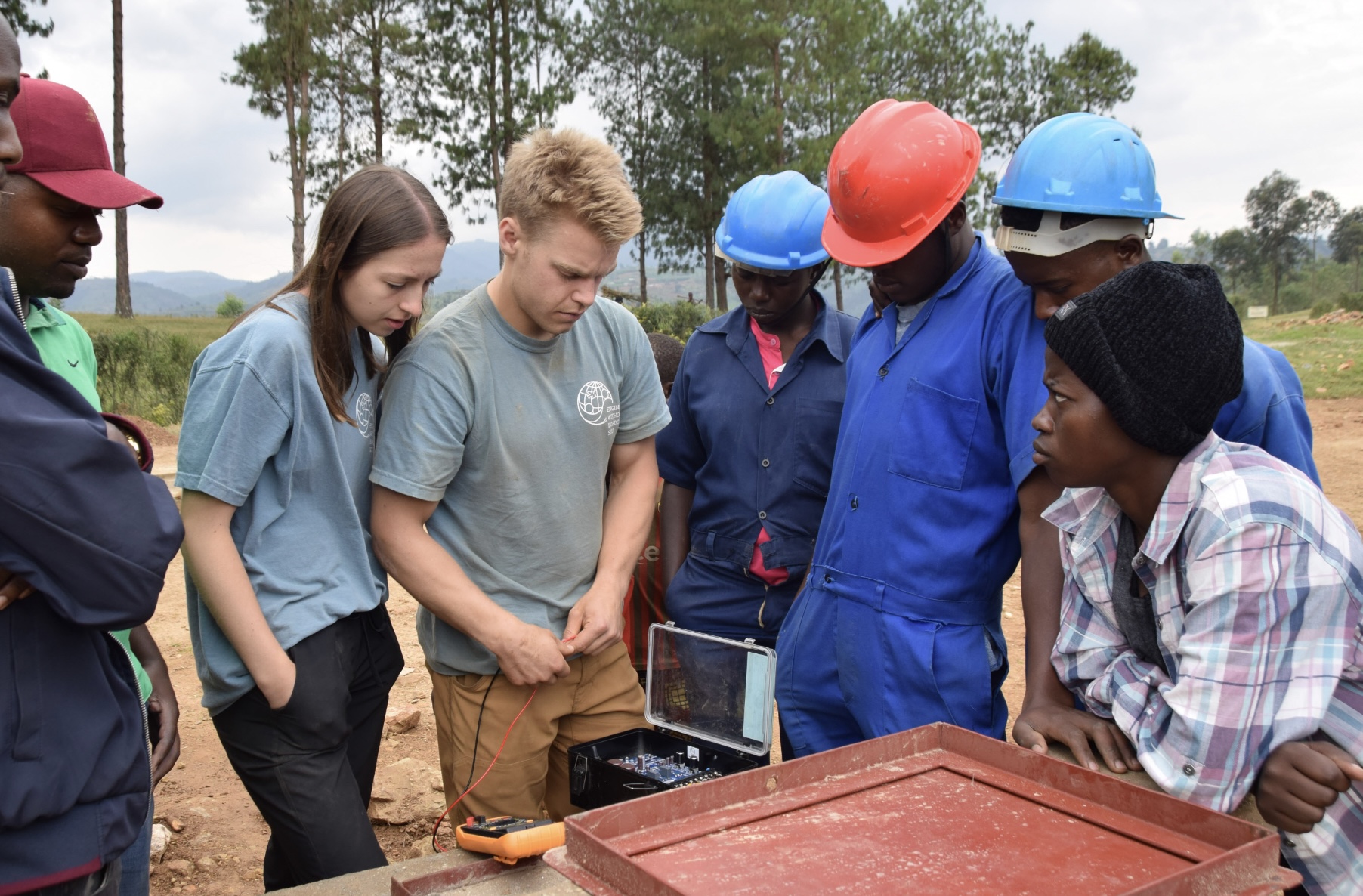 Aaron and Mia shooed up the hill confirming that water was flowing out of the pressure relief valve. They turned off the pressure relief allowing water to flow up the steep hill. Meanwhile, the team took voltage measurements near the pump to confirm minimal voltage drop. The community members, technical students, and the team waited nervously unsure of whether the overcast conditions would deliver enough power to overcome the pressure head.

After what felt like an eternity, our translator Anny shouted for joy as she heard water rushing into the tank. The team sighed in relief as the community members began to gather near the water spigot. Suddenly water appeared! The community hurried to run their hands under the flowing water! Overcome with emotion the community started to sing and dance. Before long the team was singing and dancing alongside them. A small water splashing party ensued with big smiles and laughter all around. After three years of hard work, this moment finally came to fruition.

After the joyful celebration the team got right back to business. To ensure the longevity of the project, we wanted to put a strong emphasis on education for the community including how to set up the solar panels, start the pump, turn off the pump, read error messages on the power control box, and operate the pressure relief valve. The team collaborated with the local technical students to strategize how to mistake proof the setup of the parallel and series solar panels using a variety of colored tapes and patterns, ensuring they would be set up correctly each time. The technical students then taught the community about the panel system, the pump controls, the pressure drainage pipe, and the fill sensors under the supervision of the team. Although this is a very complicated system, the community was well equipped with the knowledge in solar that they have gained from using Cart V1 and Cart V2. 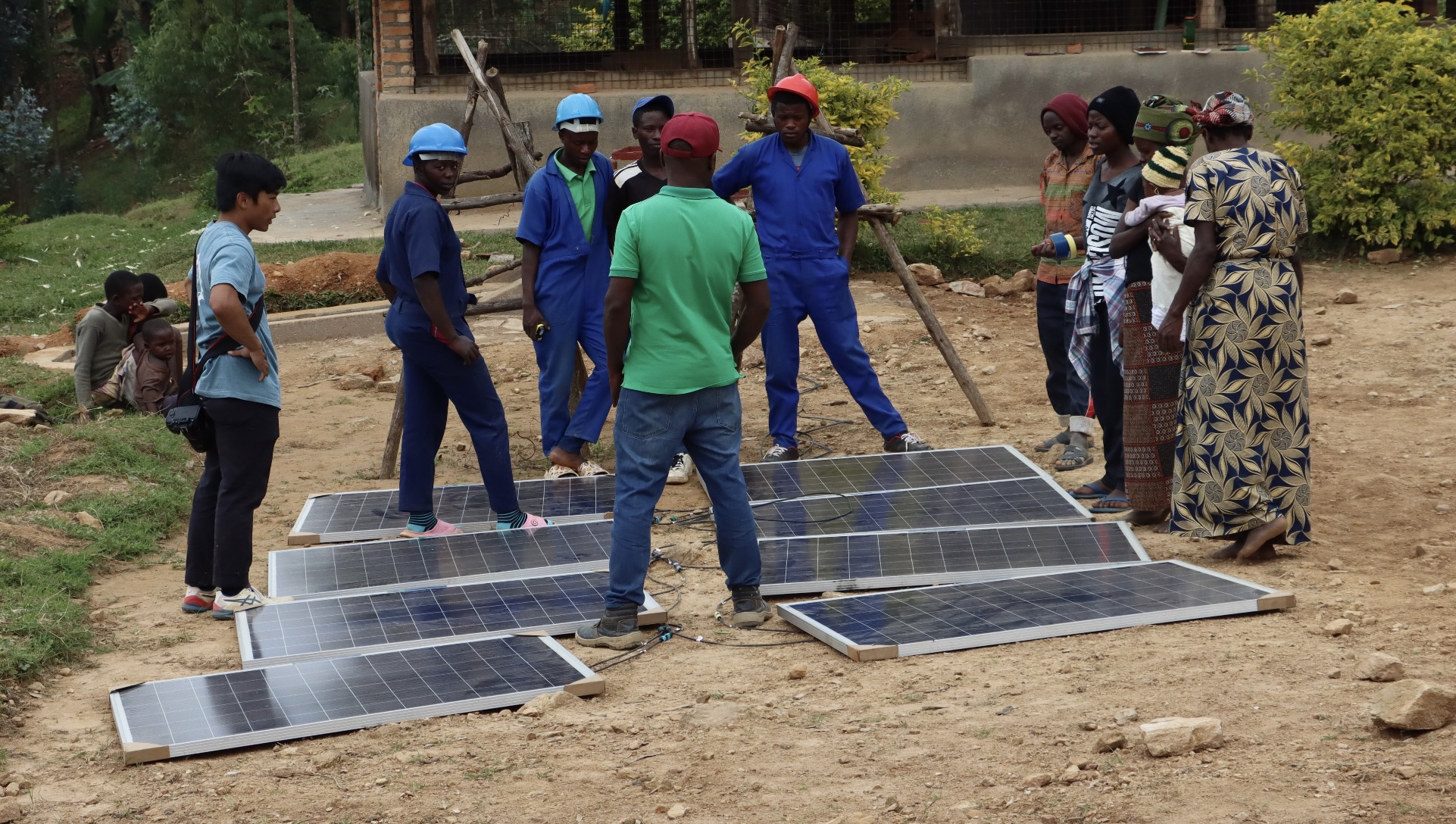 (Working with technical students on how to ensure proper solar connections)

Concurrently, Jon and Katie investigated the depleting battery health issue on cart V2. Two different types of batteries were delivered from Kigali with the hope that at least on of the pairs would work. We were surprised to learn that all 4 batteries could fit. The team recalled that they could wire the additional batteries in parallel to maintain the same voltage to the motor controller. The combined batteries 57 amp hours which nearly doubles the previous total run time of the cart. The team had to think on their feet using the limited materials available to them to make mechanical connections to the new terminals, demonstrating to the technical team what they were doing along the way. After making the final connection, the charge indicator showed full power once again. 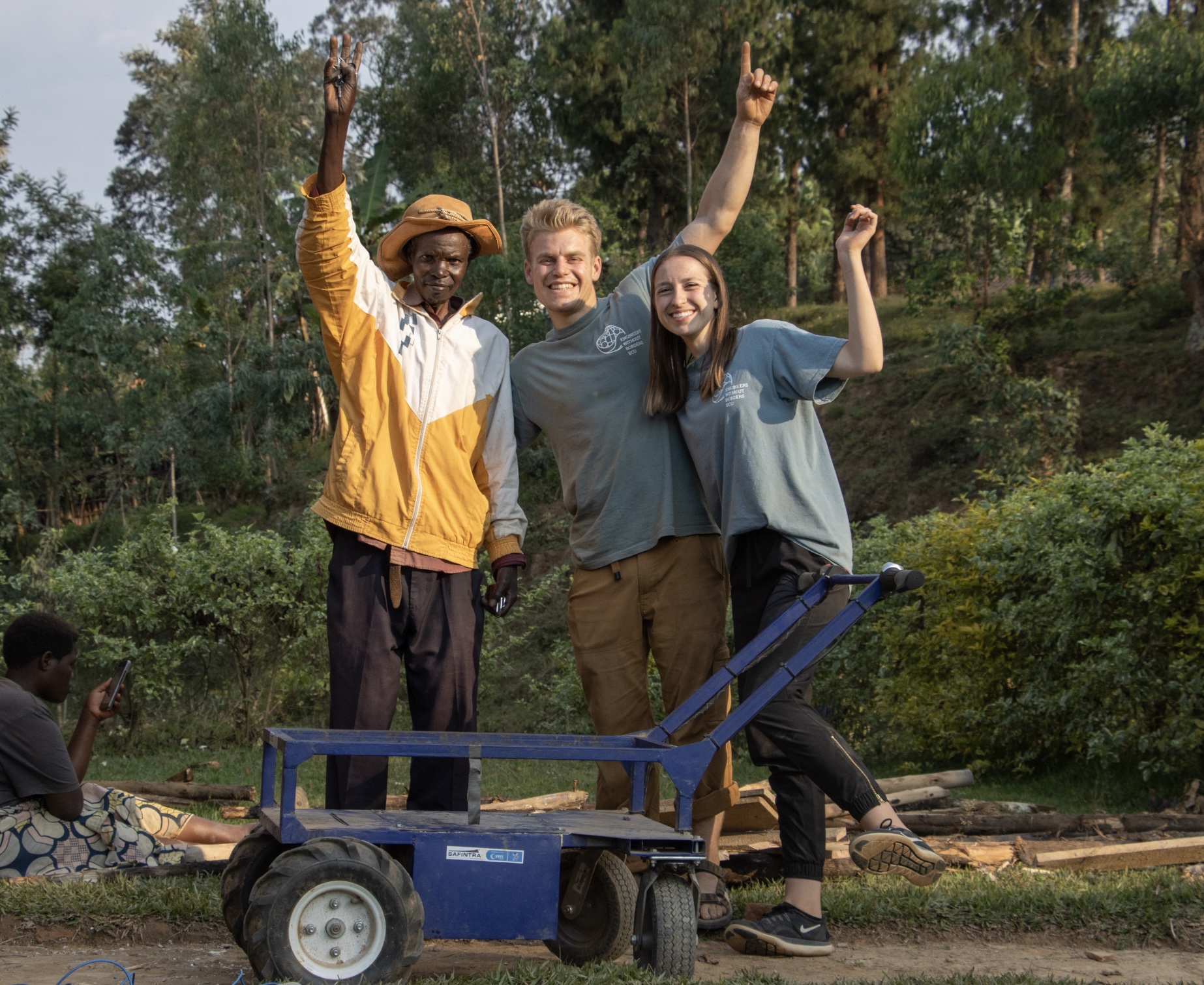 With all the goals that the team set out completed and more it was time to say goodbyes and take final photos. The community recorded a video to thank past travelers and the technical students delivered an endearing speech conveying their appreciation for their time with us. The community lovingly gifted the team with pineapples and gave many more thanks to carry home with us. 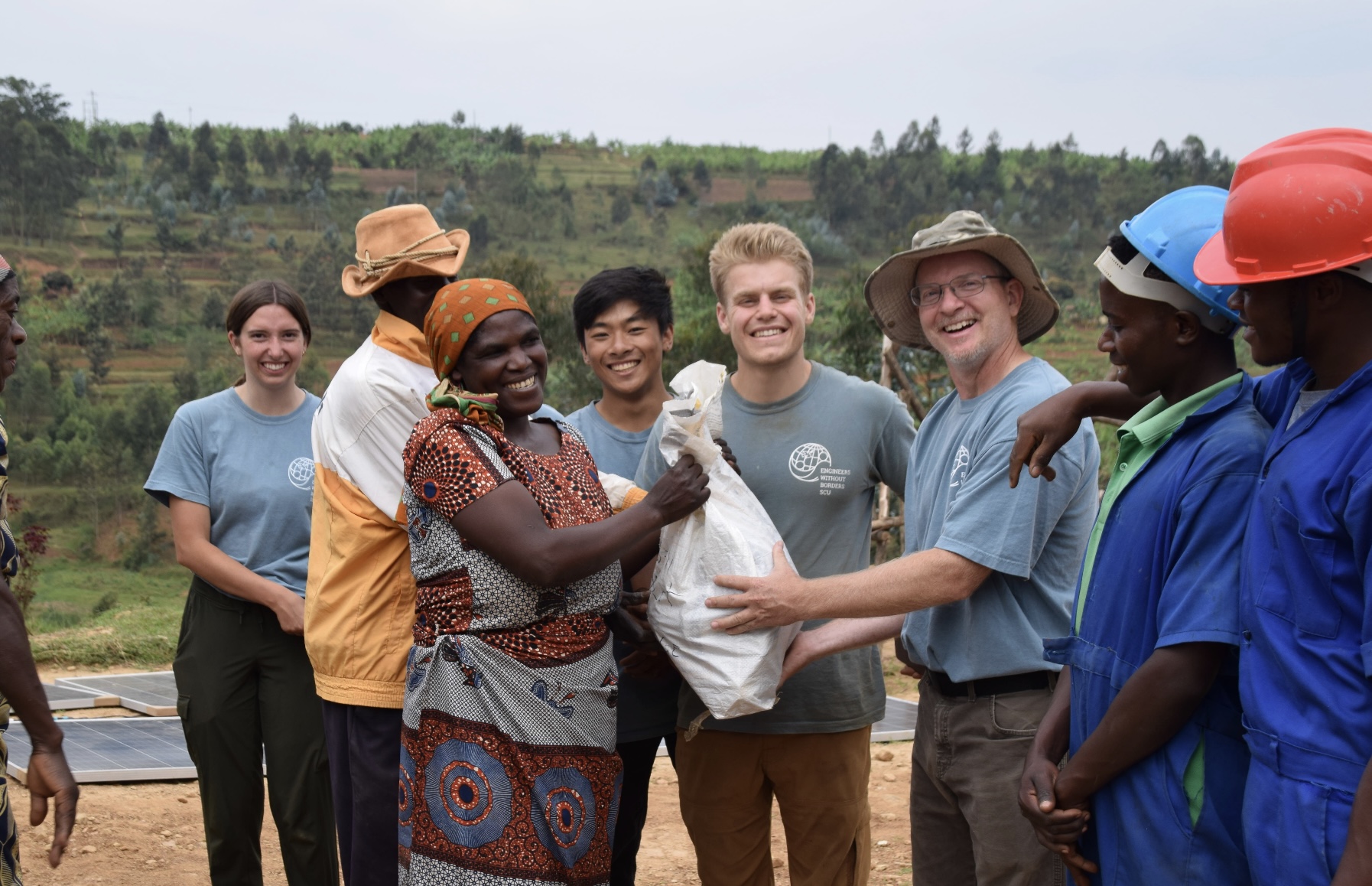 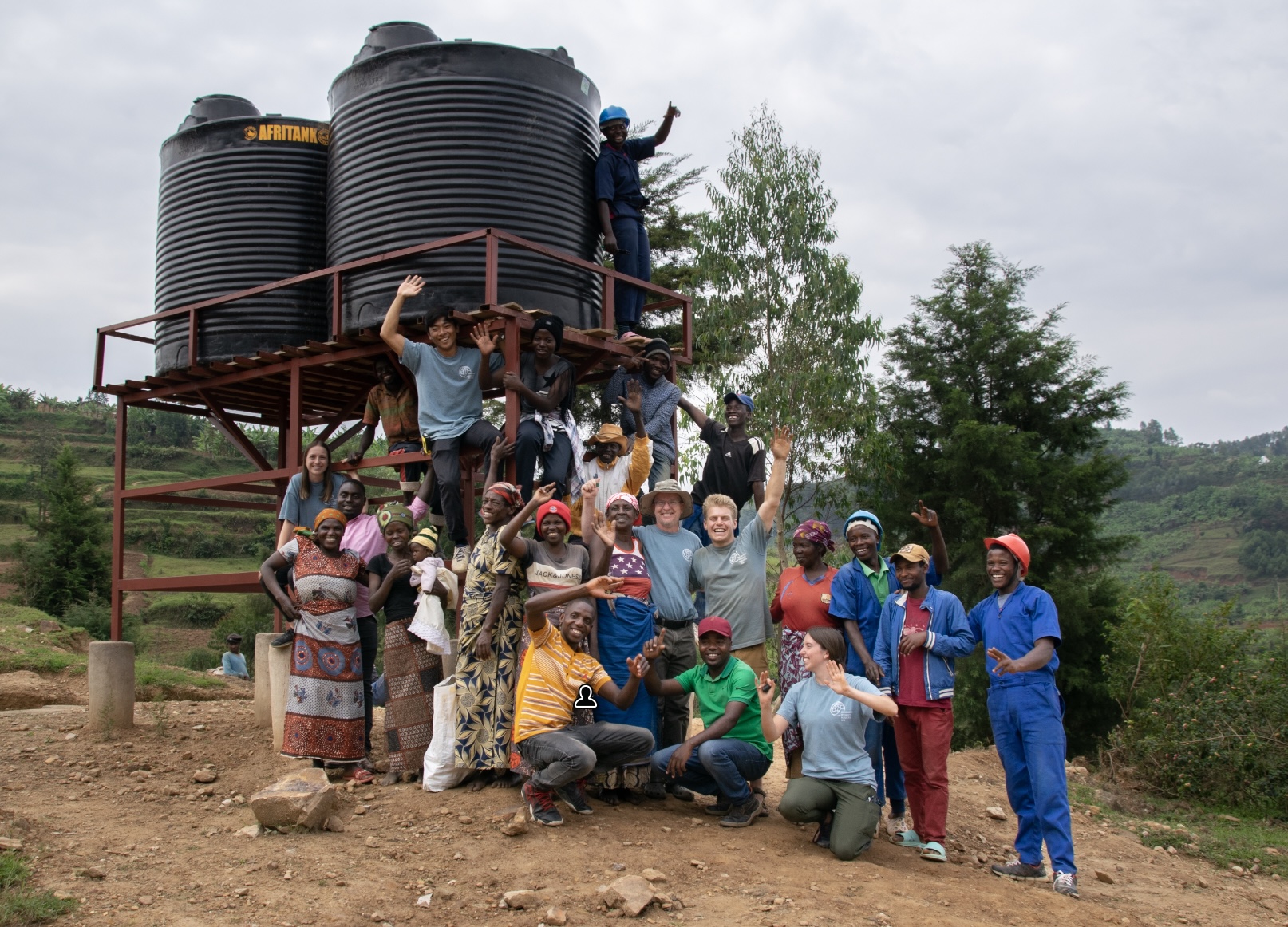 Returning to Don Bosco, the Jesuit residence in Muhunga the team was honored to stay at this week, the team sat down for their final dinner with the priests in residence. During this time, the team has been able to make personal connections with many of the priests. Despite the language barrier we appreciated each other’s company, shared many stories, and bonded over post dinner dishes.

Tonight the priests had prepared one of their best yet including fried banana and potatoes, beef, samosas, pickled veggies, and fresh fruit. Additionally, the team was surprised when an electric keyboard was brought out and everyone gathered at the front of the dining room. With booming choir voices they sang thanking God. Soon enough, the room erupted into dance with everyone circling the room. 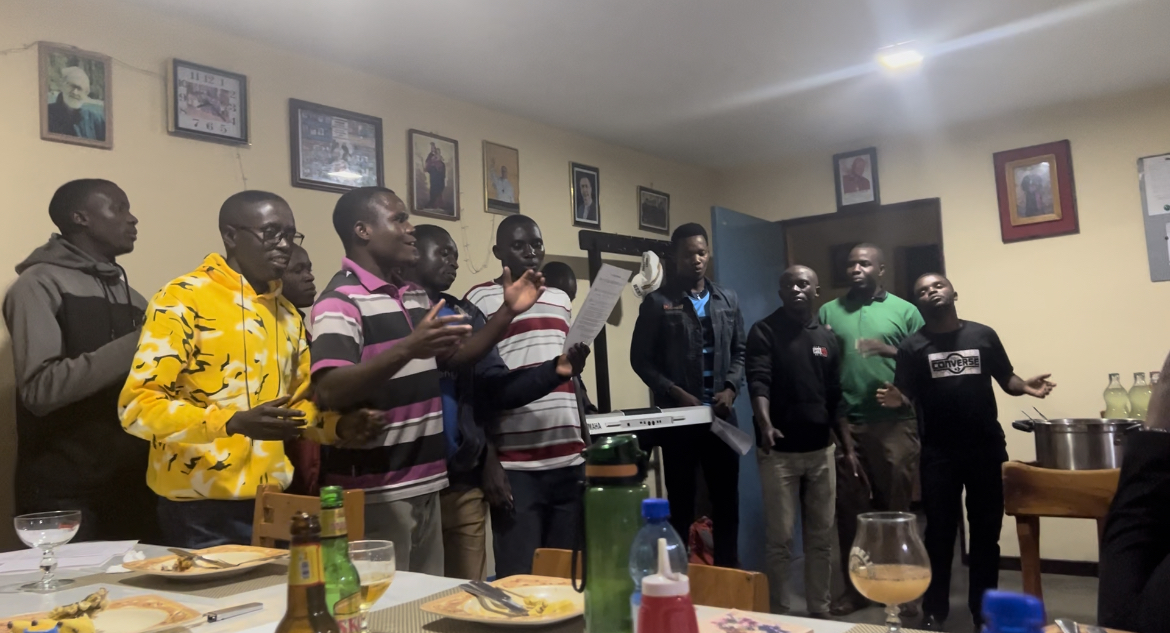 With full hearts the team is heading to KIBUYAY to spend the morning at Lake Kivu. After, they will tour the technical school of the students who helped us and return to Kigali. 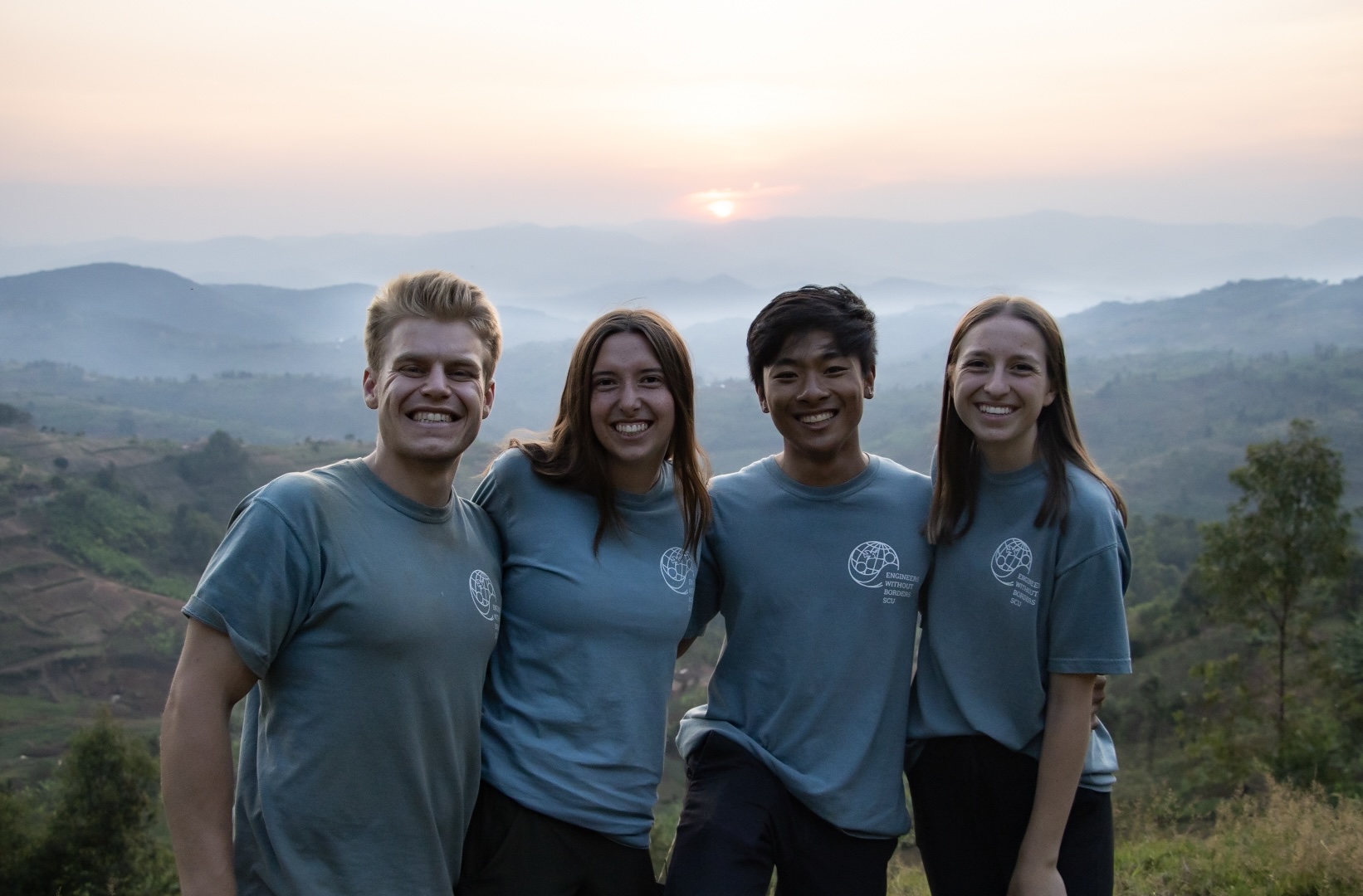 (Team poses for sunset photo on the way to Kibuye)