Another early day for the team. So thankful for the priests at Don Bosco who packed us an exquisite breakfast of coffee, bananas, ground nuts, watermelon, bread, and bananas for the road. Lots of coffee was regrettably shared with the floor as the bus clamored down the road to the community. Upon arrival, we were once again greeted by the smiling faces of the technical students in their hard hats and coverall suits ready to work. 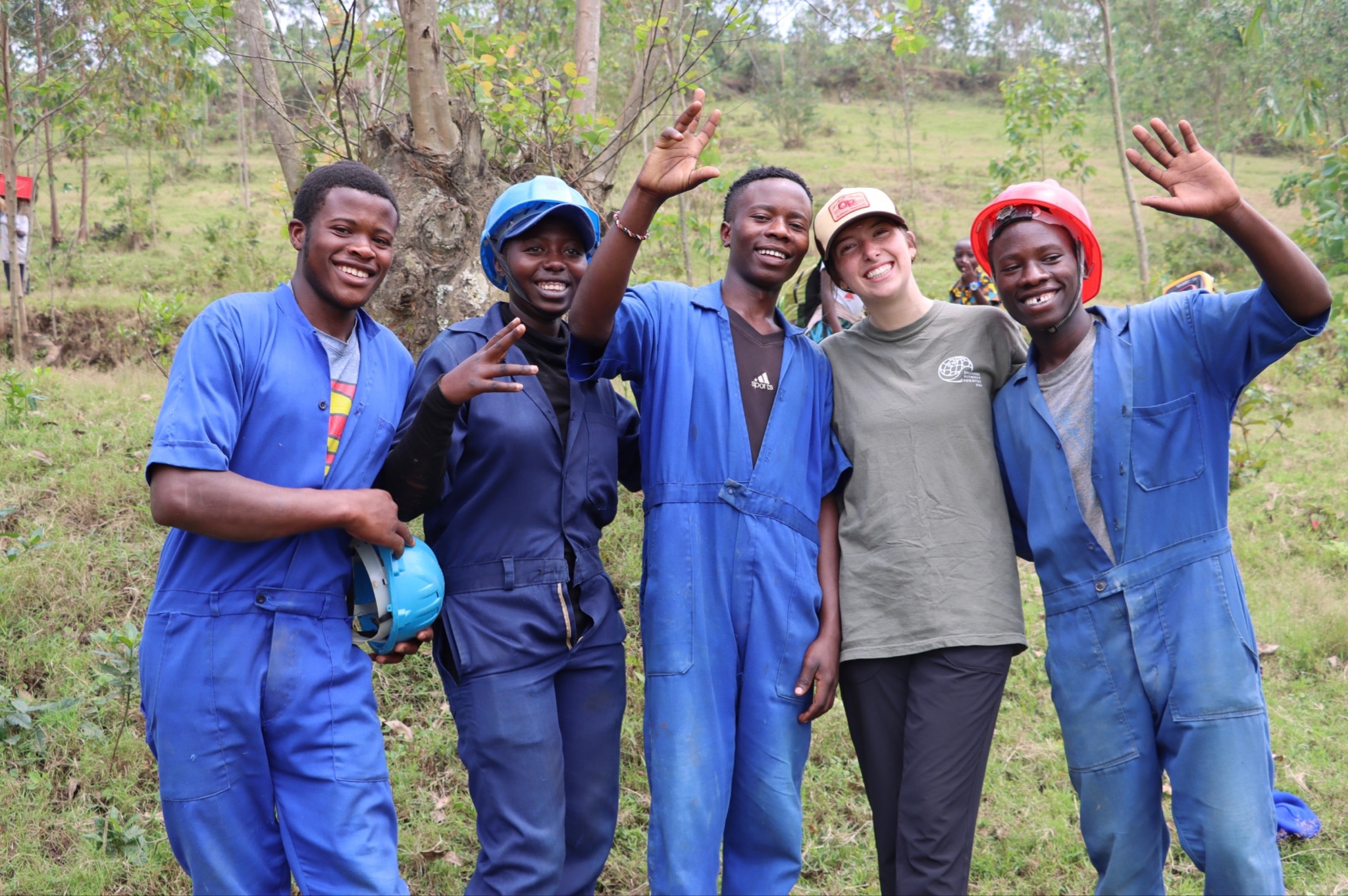 (The technical students pose for a photo with Mia)

When we arrived, we learned that the water level of the Rutisba water source needed to be lowered until it was possible to patch the temporary hole added during the construction of the encasement. A single pump was being used to remove water, however, the water was not pumping at a fast enough rate to empty. To measure progress, the team had been discussing over engineered solutions for the measurement predicament, but were humbled when the technical students assessed the water level without entering the enclosure by dipping a stick and measuring the resulting damp area. Ultimately, it was decided that a second pump would be needed to continuously clear the source so that work could be done. This put us behind schedule because until the hole is patched, the pump could not be installed. To make the most of our time, the team decided to focus on community interviews and cart maintenance. 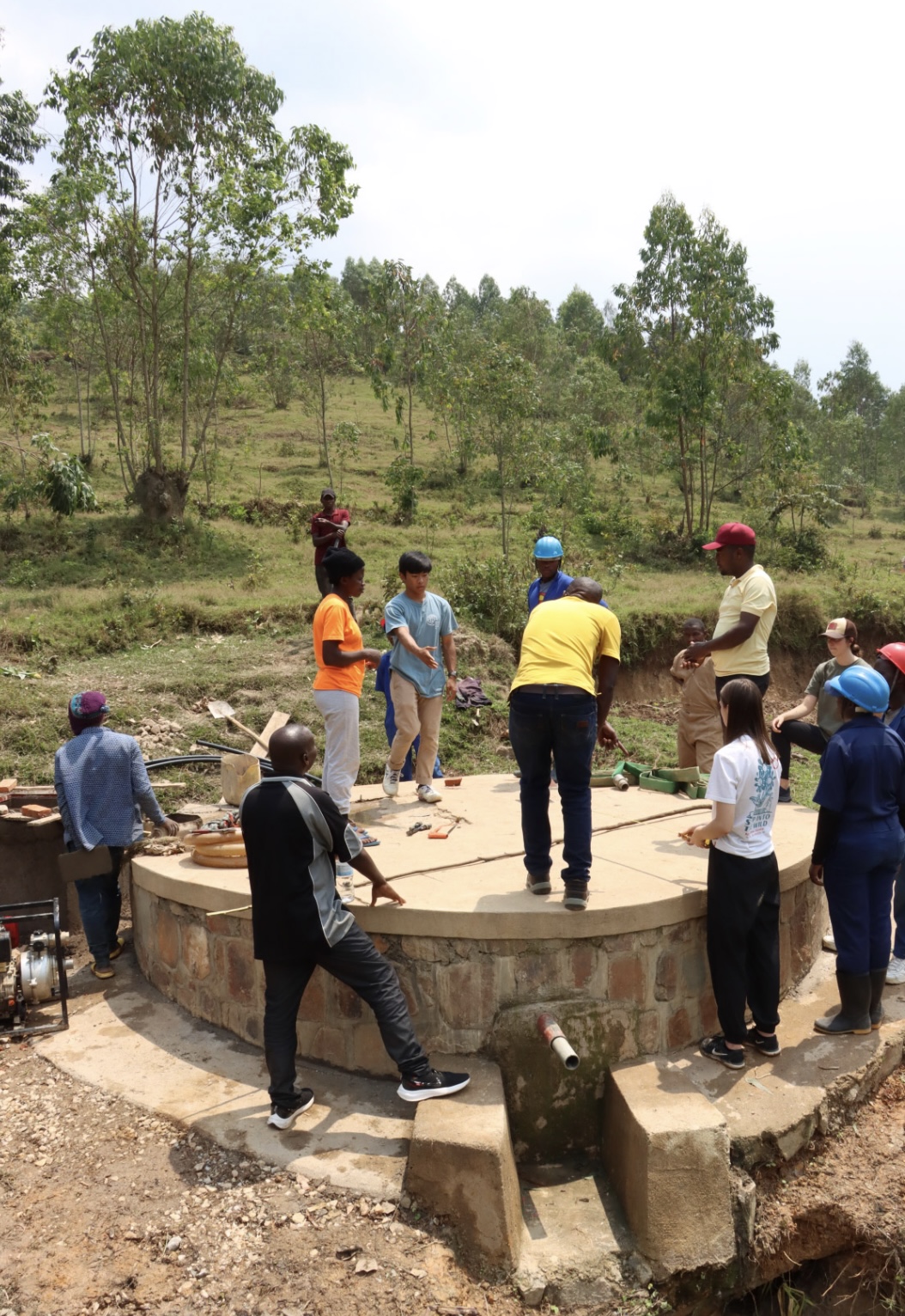 (Discussions with Joseph and his team on the Rutsiba water source)

With the help of our amazing translator, Anny, Mia and Katie sat down with Mediatrice and Dorosella, who are the president and secretary respectively of the community. Our conversation with Mediatrice helped us to learn about the role the carts play in their day to day lives. They currently use the carts not only to transport materials needed to produce tiles/bricks but also as a source of electricity for their phones.

We were also able to learn a lot about the community’s goals for the future and the impact the water project will have on them. They shared that ever since their kiln was washed away in heavy rainstorms, they have been unable to mass produce bricks and tiles, so have no sustainable income. Given the aging populace of the cooperative, they hope to move away from the labor-intensive task of tile and brick making in favor of opening their own retail businesses. They hope that the water project and roadside bathrooms will facilitate their dream. Additionally, we learned how much water was sold for and that the cooperative members that live closest to the coop will use that water source as their primary source once filtration is implemented next year. We also learned more about the business deal the cooperative is making with the local government providing water for the repaving of the main road. We were heartened to learn details about the impact that our past travelers and professor advisors have made on the community such as Dorocella’s daughter, Sara, returning to school by Dr. T’s recommendation. Sara is now going into her last year of high school. We are going to continue interviews in the coming days in order to deepen our understanding of the community and the individuals that form it.

While Mia and Katie were in interviews, Aaron and Jon worked with the technical students to replace the breaker in Cart V2 and were pleased to learn that the students were already familiar with this style of breaker. After verifying the cart’s functionality with the new breaker, we reconfigured the throttle of Cart V1 to match Cart V2. This configuration makes it easier to regain control of the cart as it moves further away from the operator. Additionally, we confirmed that the forward and reverse switch was the root cause of the cart’s inability to reverse. After carefully dissecting the miniature components of the switch, it was clear that dust had encroached into the assembly, preventing contact. After cleaning the contacts, the switch regained functionality. Calixte, one of the primary cart drivers, was pleased with the repairs and enthusiastically thanked the team. 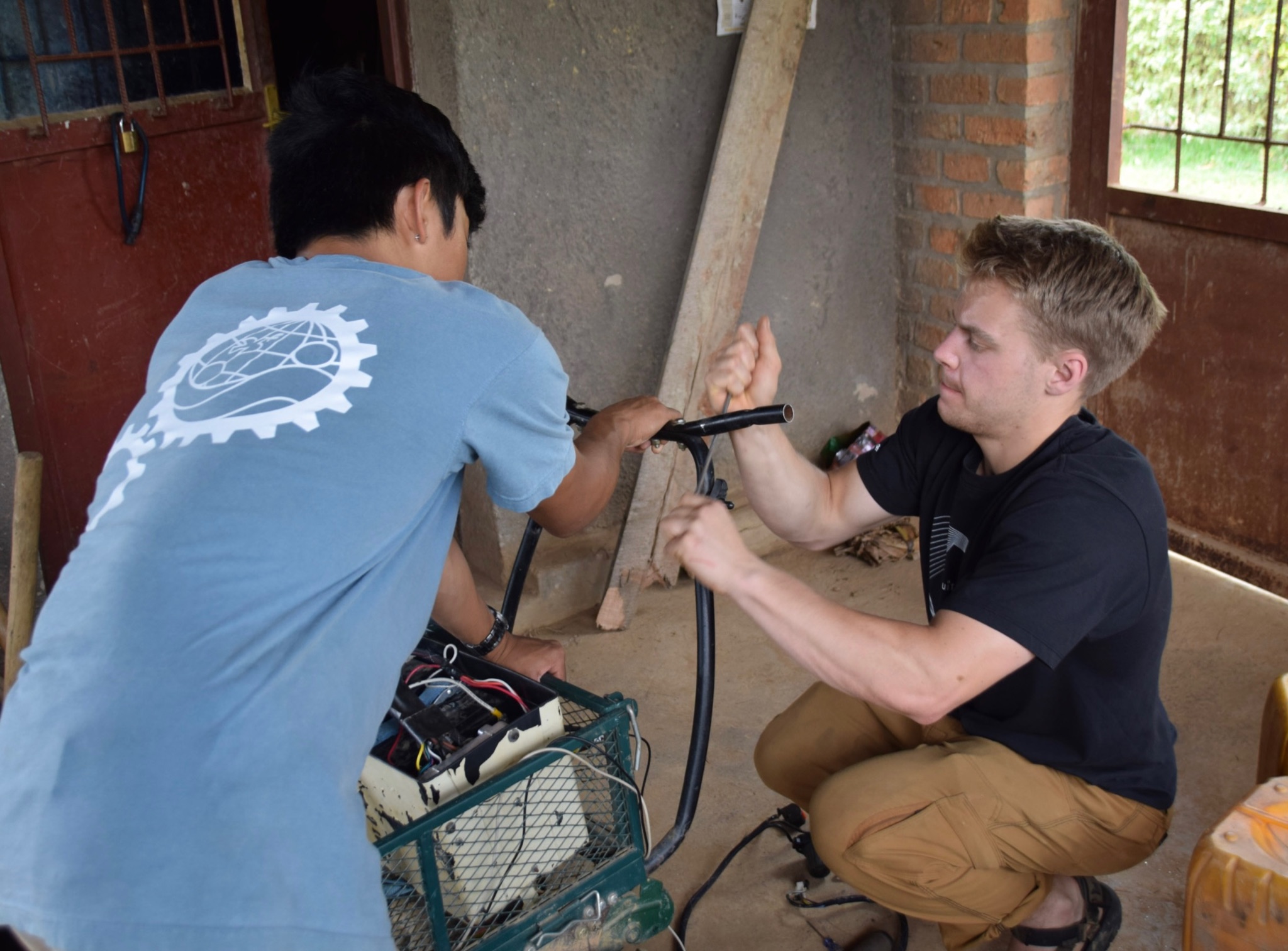 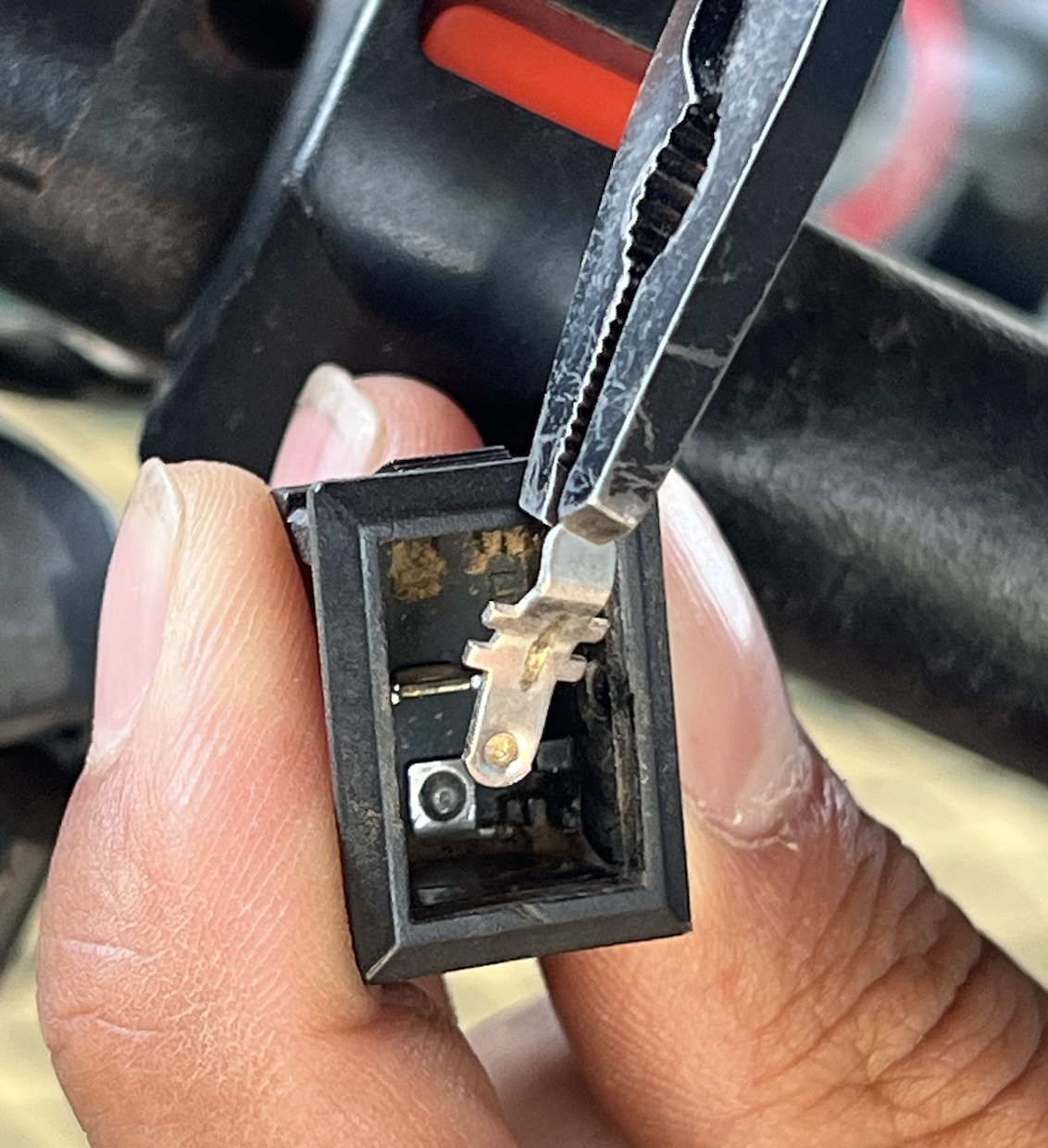 (Aaron and Jon working on the cart + the suspect switch component)

At one point while working on the cart, the community pulled Jon aside and showed him the community books, printed books with photos of the community and previous EWB members, that were gifted the cooperative to strengthen their relationship. They pointed to pictures of Jon and their community members during the trips he took in 2016, 2017, and 2018. They also pointed to other travel team members, and even the portraits of non-EWB travelers saying their names with many thanks. This experience was touching and speaks to the importance of the interpersonal connection developed between students and the community.

(Reviewing the community book put together by the travel team)

After a long day, the team headed back to their van, but were stopped midway by the technical students, who came running down the road with long sticks of sugarcane. They showed us how to peel off the outer shell and eat the sweet and succulent flesh. After working through lunch, a regular practice for this years and previous years travel teams, the sugar cane was particularly refreshing. The community laughed in delight, impressed by Aarons strong jaw and teeth as he voraciously tore apart the canes. 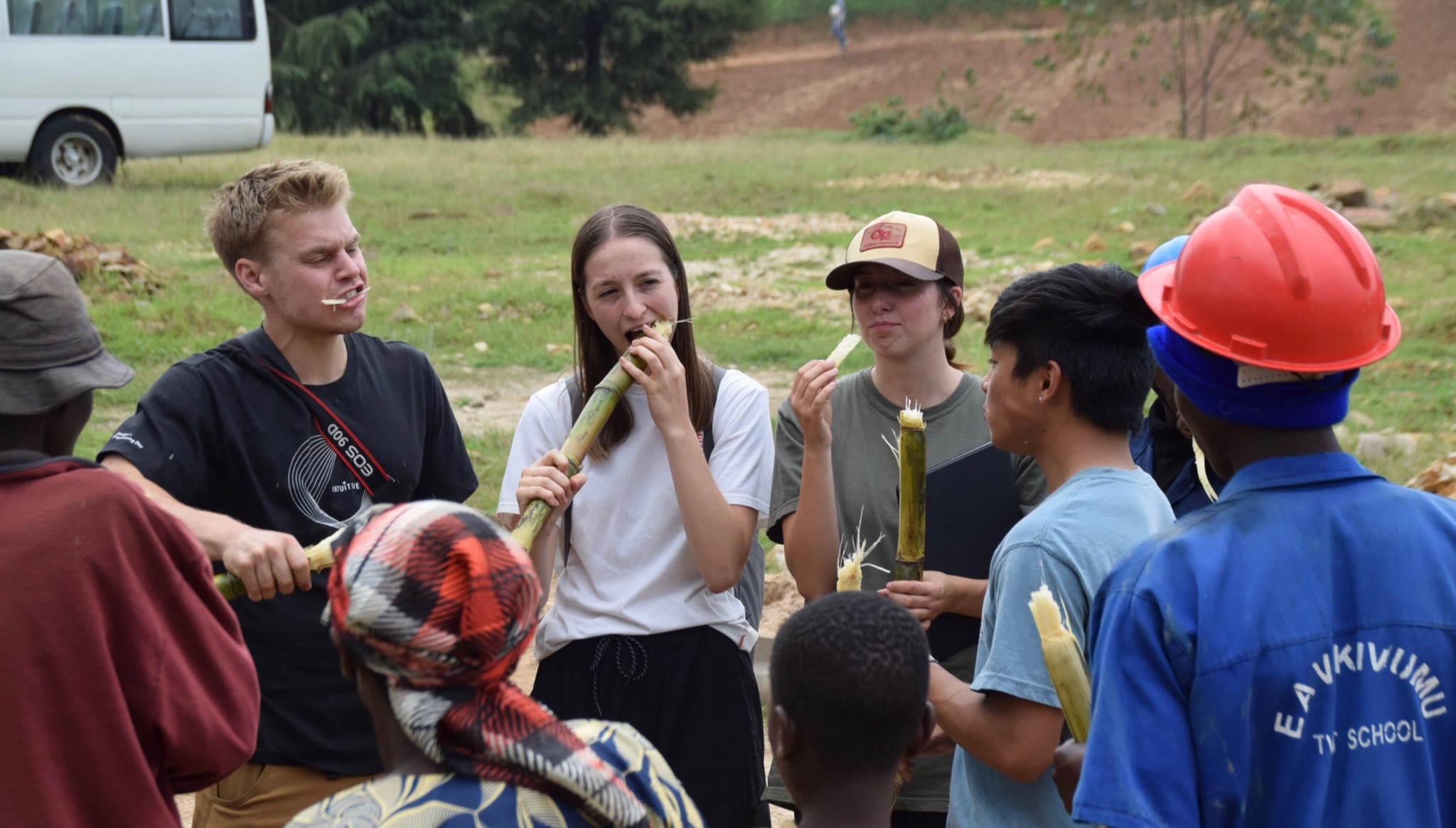 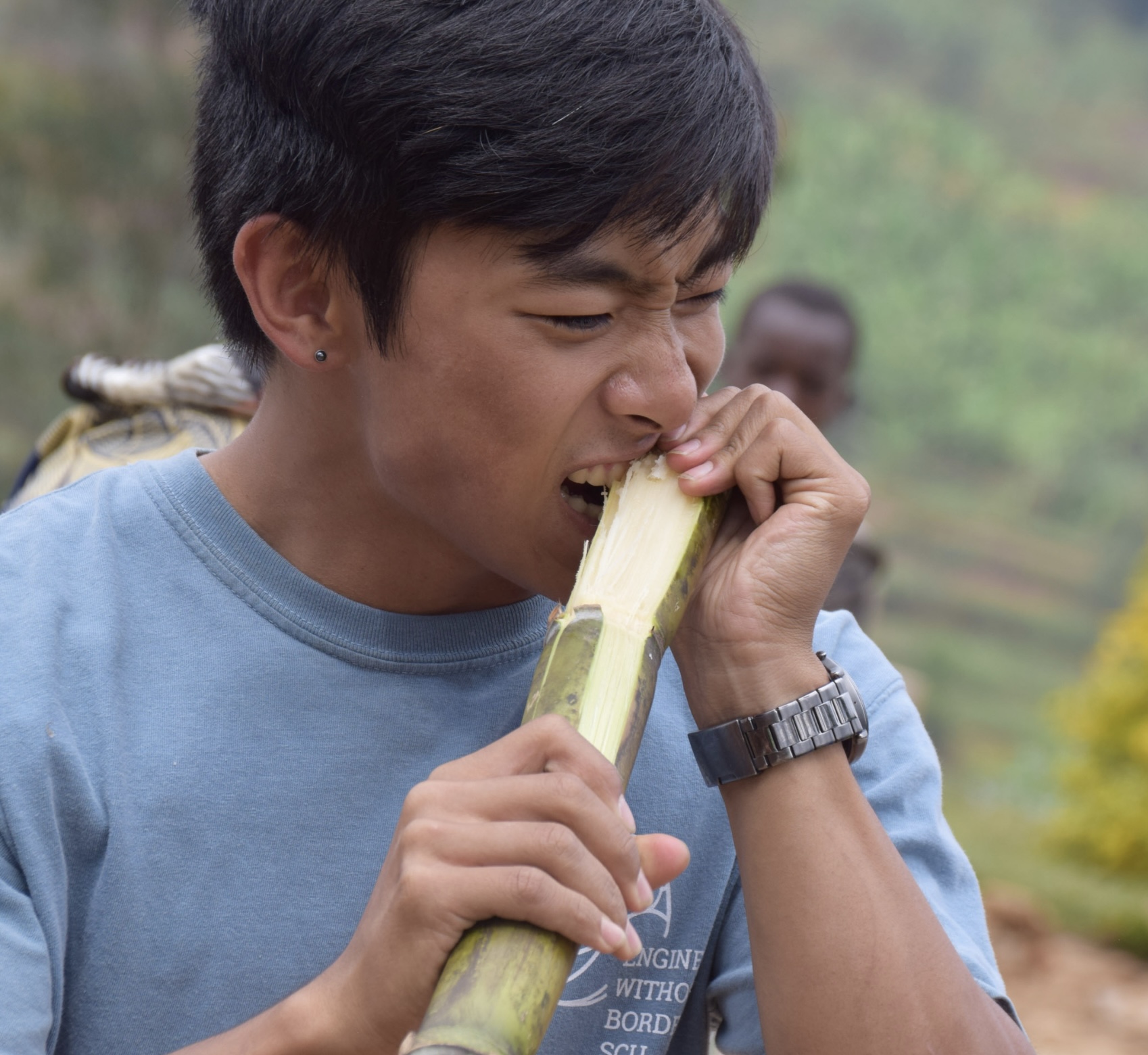 (The team munching on sugar cane)

Fresh off the sugar high, the team headed to the Muhunga market to gather materials they needed to suspend the pump in the Rutsiba water source and the conduit to protect the underground wires connecting the solar panels to the pump. The first vendor we visited only had a 30-meter roll. Unlike Kigali, Muhunga is not a major city and they do not have large vendors. Upon learning that we needed to purchase at least 140 meters of conduit, the seller we were talking to called other nearby suppliers. Within a minute, 3 new 50-meter rolls were delivered to the shop.

After being provided a wonderful home-cooked meal by the priests at Don Bosco, the team closed out the day with reflections, and other work that the team needed to finish before the next day.

The team was energized to get started this morning. Returning to the community once again, we got right to work organizing cables to connect the various electrical components including the solar panels, the pump, the controller, and the water tank/ source sensors. To do this, we ran up and down the steep trenches untangling and laying wires on top of the ground where they will eventually be buried. We quickly learned that we were short on cables for the electrical grounding and water tank sensors. To maximize our time, Annie and Brent volunteered to drive to Muhunga while the rest of the team continued working. 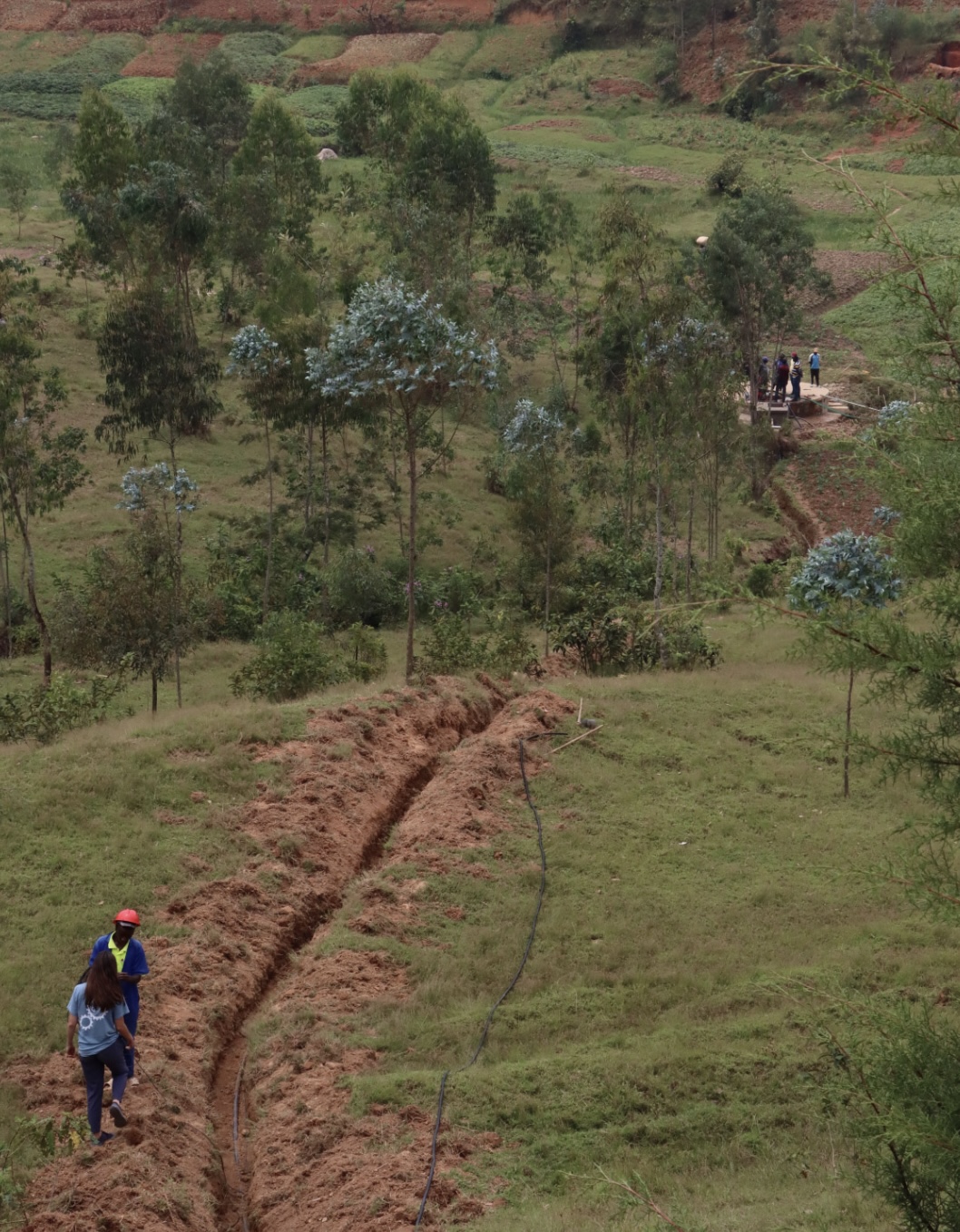 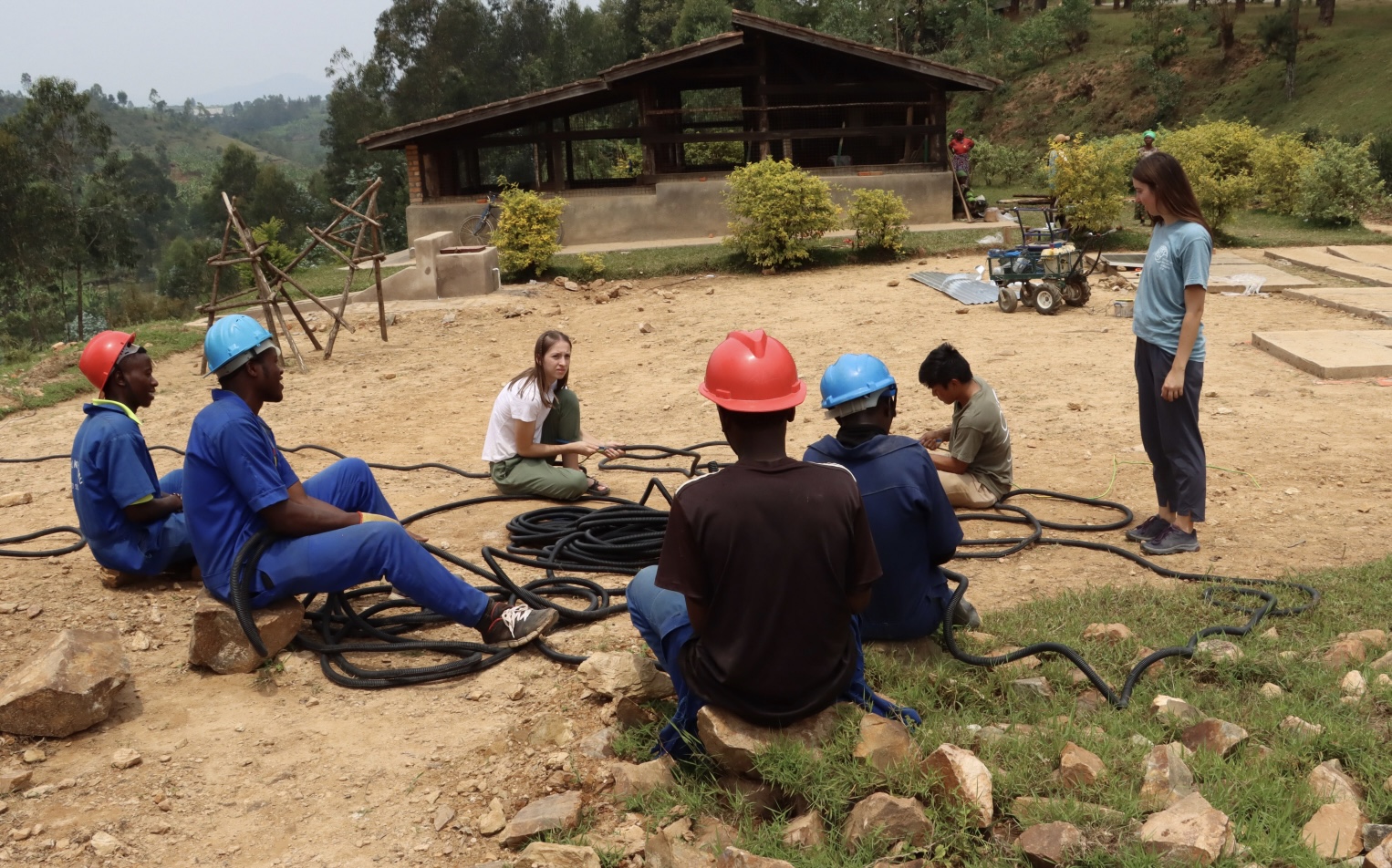 Although the community had pre-dug the trenches for the water pipe and electrical by the time we arrived, we decided that an additional trench would need to be dug so that we could add our power control box closer to the community building in the interest of security. To dig the new trench, the team began digging alongside the community. The co-operative members were patient and taught us how to use their tools. Callixte commented that Rwandans are strong because they do labor themselves and Americans are not because we use machines for everything. The community dug the trench with such efficiency, we were just happy to take direction and help where we could. 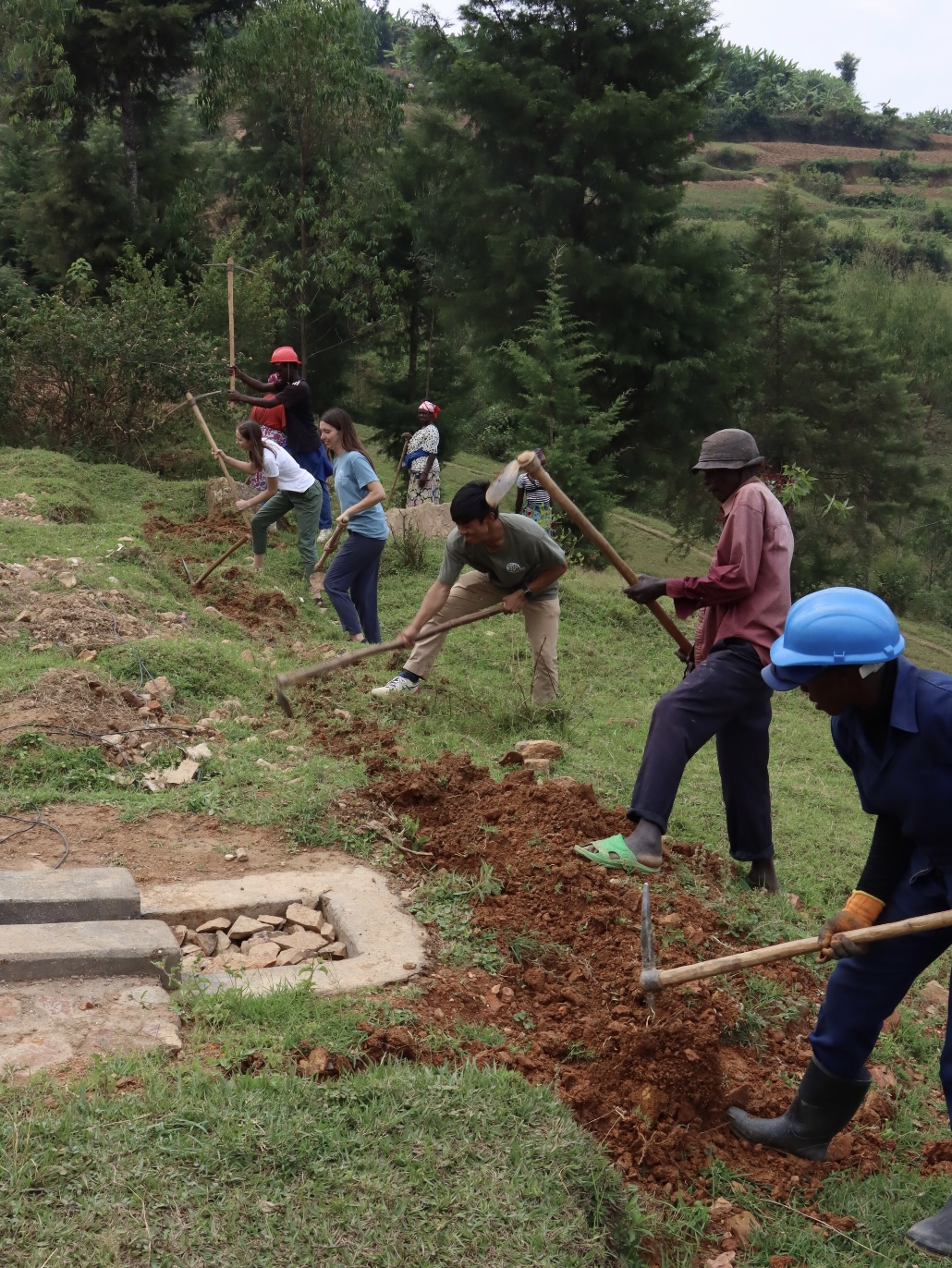 (Digging the trench for electrical wiring with the community)

By this time, our favorite technician, Sixpert, completed the closure of the temporary Rutsiba water source drainage hole and had added the support needed to hang our water pump. Since the water was removed from the hole, the team was able to climb inside to hang the pump. Standing inside the 11 ft deep and nearly 12 ft diameter hole gave the team a new perspective on the massive volume of water the pump system will be able to provide. Because the borehole had been emptied to complete the construction, we were in a position to take recharge measurements while the team was hanging the pump. We discovered that the flow rate of the encased borehole is approximately 1,200 L/hr, which allows for the community to pump 10,000 L every day. This data confirmed the findings from the hydrogeological survey which we coordinated with Africa Drillers in 2020 and we are confident that the source can grow to meet the future needs of the community. 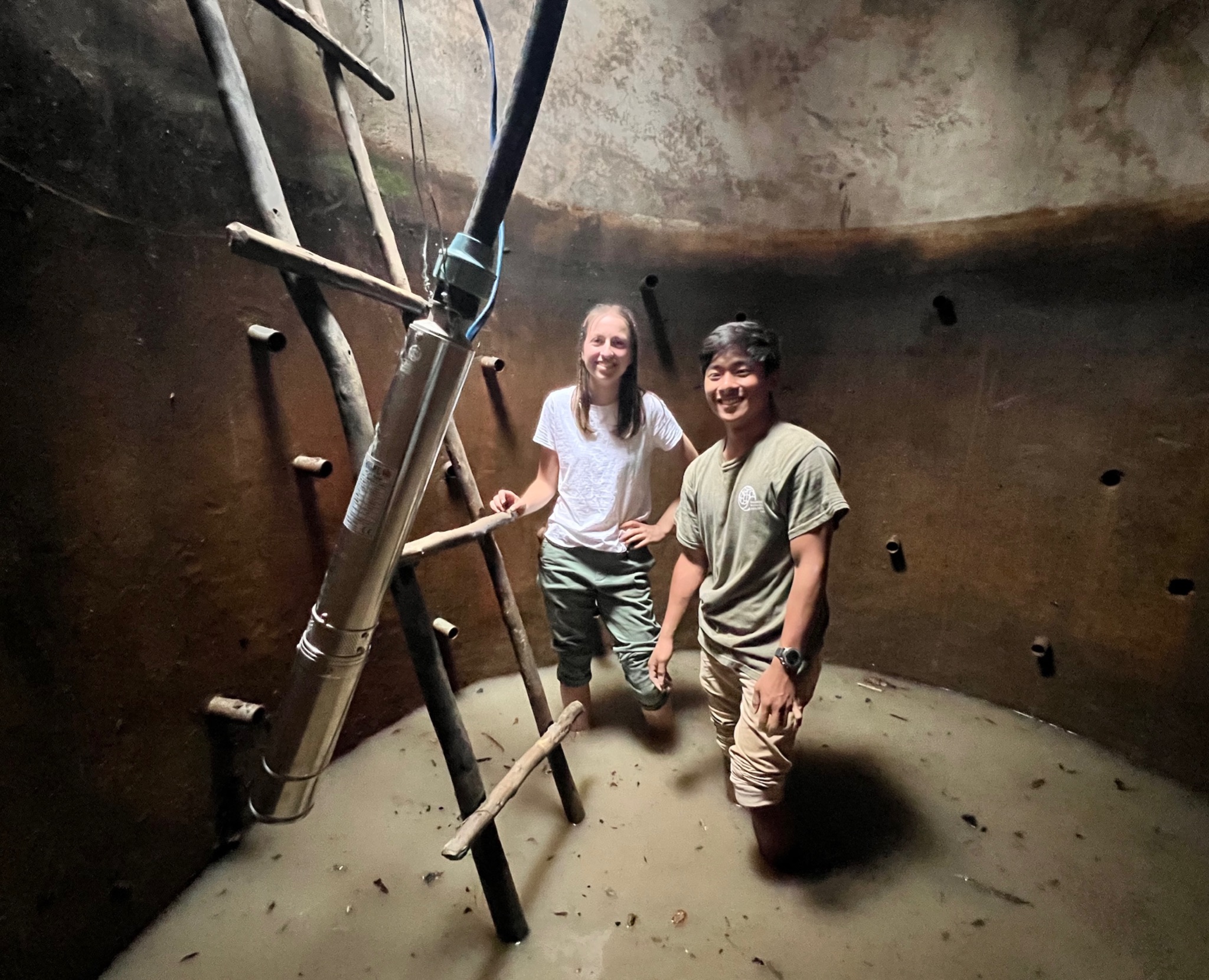 (Katie and Aaron standing in the water source with the pump) 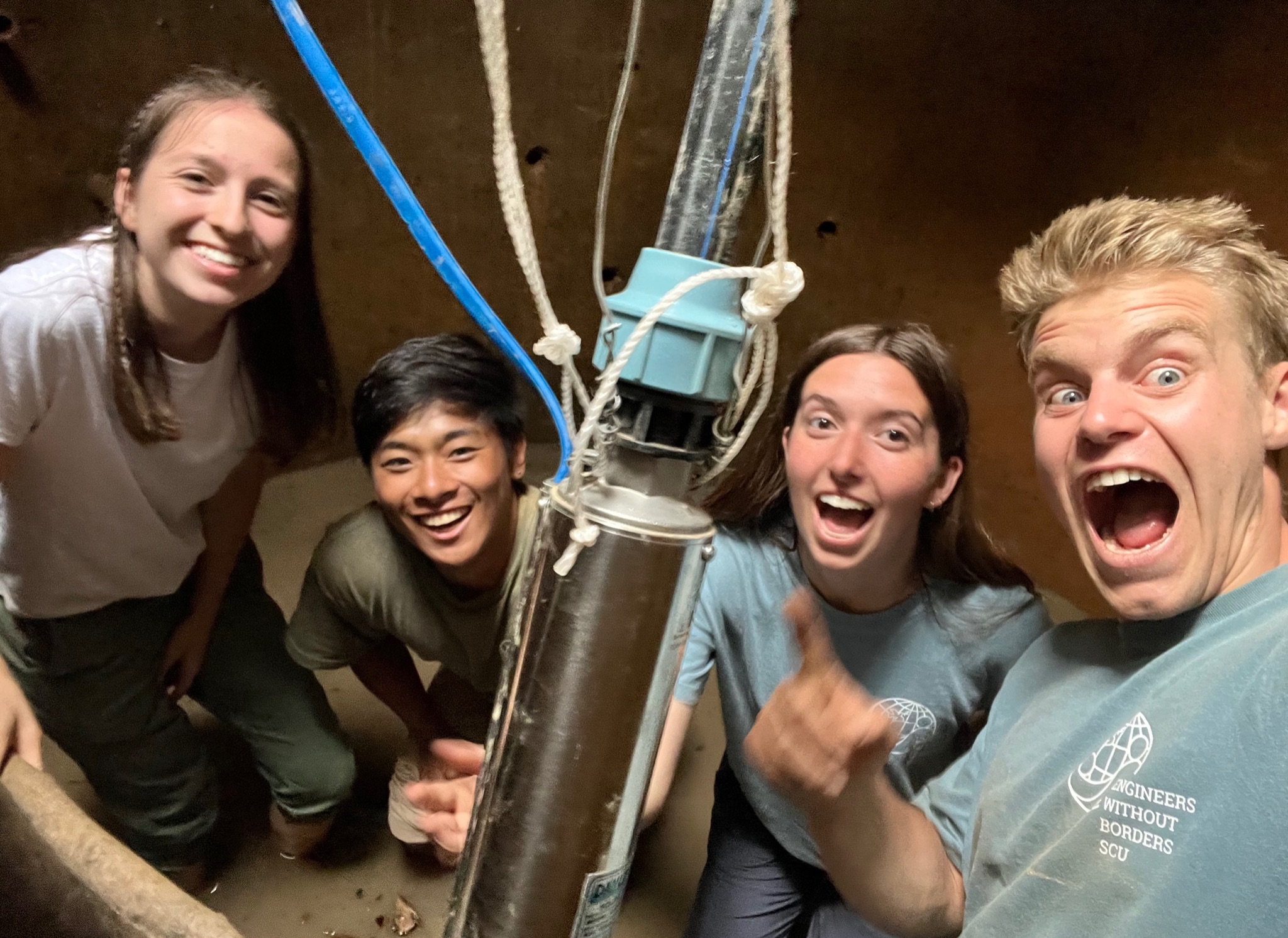 After the pump was installed, we secured the electrical including feeding the wiring through the pipe in the side of the borehole and up into the trench. The pipe was long, so we used metal wire to hook the cables before pulling them through. This quickly became a team effort with many surrounding and helping with cable management. Successfully hanging the pump and routing this cable was such an exciting milestone for the team that we lost track of time. Before we knew it, it was past dark. We cleaned up and left the area at nearly 8pm, ready to eat dinner. Hearts were full, and Aaron’s mouth quickly became filled with the best Mango he had ever had.

Tomorrow, the team plans to complete and bury the wiring. If all goes well, the pump will be tested for the first time.